Living in the New England countryside

I couldn’t make sense of the flowers on this plant, but butterflies weren’t waiting for me to figure it out.  They alighted for extended visits, apparently finding lots of what they wanted. Nectar.  The flowers were an easily accessible width and length for a butterfly proboscis – uncoil, probe and drink.  The butterflies clung to the flowers long enough for me to get lots of pictures.

A colleague happened to see my pictures (one benefit of social media) and suggested that the shrub was buttonbush, Cephalanthus occidentalis.  With those names in hand, I quickly found pictures that matched what I was seeing.  (You were right, Karolina! Thank you!).  The plant was growing right at the edge of the pond, exactly the wetland habitat mentioned in all the references.

The buttons of the name are spherical clusters of many flowers, each flower a narrow white tube of petals with the pistil sticking out (some authors liken its shape to a pincushion.) The stamens are a bit shorter than the floral tube, so the flower depends on something like a butterfly to probe into the tube and pick up pollen from the anthers.  With so narrow a tube, the pollen is hard for a butterfly to miss.  The pollinators get nectar to fuel their flight and growth, and the plant gets pollinated when the greedy butterflies move to the next plant in search of more nectar.

If the shape and sweetness weren’t enough, buttonbush also has high levels of volatile chemicals that attract insects from afar.  Their perfume is complex, and it seems to be a good lure for passing pollinators.  And once the butterflies have landed, they just can’t seem to get enough of the goodness they have found.  They probe and probe among the flowers on each button, and only then do they move on to the next. 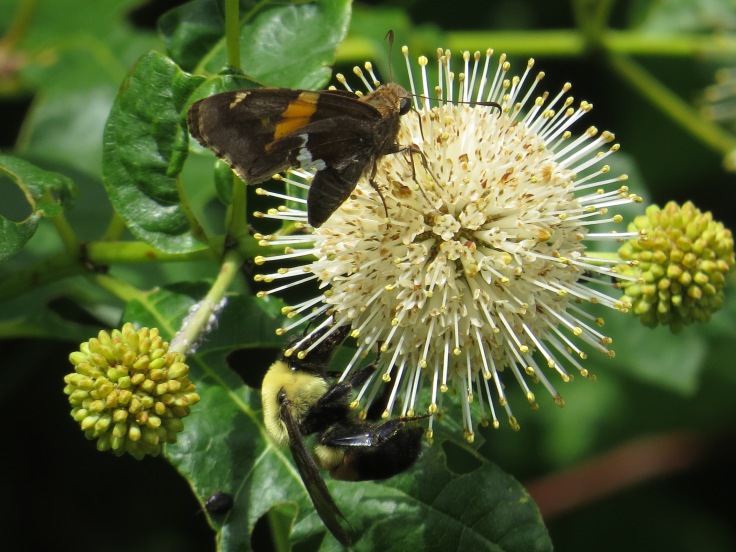 For the time that it flowers, buttonbush is an oasis near the pond.  There are flowers elsewhere, of course, but most don’t grab the attention of butterflies like buttonbush.  For a few days, it is the place to be.  But it won’t last forever, and thus the fervor of the butterflies is warranted.  Pollinators have to get what they can while they can.

My wife and I live on five hectares, mostly wooded, in central Massachusetts where I cut firewood, tend the garden, read Robert Frost and other poets, and observe the land, the sky and the living things nearby, often with camera in hand. I retired from Assumption College in Worcester, MA, last year. I taught biology and environmental science, and oversaw the design and construction of a new science building. I grew up outside of Chicago, the son of a teacher and a statistician. I started to pay close attention to the natural environment as an undergraduate, and continued on to graduate work in ecology. My fieldwork on plant-insect interactions has taken me to New York, California, Arizona, Massachusetts, New Jersey and Pennsylvania. My latest book explores the intersection of poetry and natural history: Stopping by Woods: Robert Frost as New England Naturalist. Watch this site for pictures and posts about the pond at the end of my road, plus thoughts about my life.